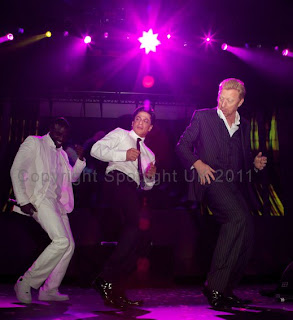 Spotlight UK recentley covered an Exclusive guest list only event at the o2 Arena for Hero. We had backstage access to the start studded event which was presented by Bollywood Megastur Shahrukh Khan (dubbed the King of Bollywood), as well as including attendance and performances from worldwide famous R&B singer Akon, Oscar Award winning composer A.R Rahman, former Formula 1 racer David Coulthard, 6 times Grand Slam champion and Olympic gold medalist Boris Becker and Bollywood stars Anushka Sharma and Ranbir Kappo. Video coverage of the event will be coming soon.
Posted by SpotlightUK at 10:10

SpotlightUK
Spotlight UK is a video and media production agency, with a tight knit team of professionals and world class facilities. We have Video, Photo, Studio and Multimedia facilities all under one roof making us conveniently available for a variety of purposes and able to sort out all parts of whatever you may be looking to produce. We can help you communicate effectively with your target audience whether you're looking to promote, capture or highlight an event. Our facilities and services have served from small enterprises, to large corporates and A listers! Set up by Film graduates Munsur Ali (Director) with the aim to offer a level of service that is second to none, practical and realistic with the added wow factor in each and every one of our projects. Our projects range from corporate videos, documentaries, promos, independent films and web videos, while our clients range from enterprising individuals and small organisations to global brands, such as HSBC, Canary Wharf, City of London, British Home Office and of course many celebrity coverage including 50 Cent, Jagged Edge to Mike Stock (Stock Aitken Waterman) and many more...